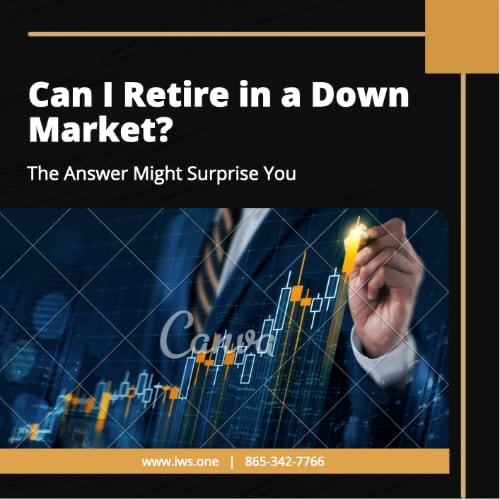 Can I Retire In A Down Market?

NOTE-Meant to say end of January of 2022 in this video, not end of December of 2022. Sorry for the confusion.

I wanted to put this video together because I know a lot of you are concerned about the state of the economy and especially your portfolio. I also understand that it’s even more concerning for those of you who have just retired or are about to retire. If you are my client some of you may have already seen what I’m about to show you. Even if you have, it’s worth watching again.

Alright what we’re going to start with is called a skittles chart. It’s called the skittles chart for obvious reasons, I mean if you took a bag of skittles and emptied it out on a table it might look similar to this, right? Just colors everywhere. So, if you look across the very top it represents each year. So we selected 2000 through 2022, if we scrolled across you can see all the dates across the top there. All these individual colors represent different asset classes that we can invest in. And the one at the very top of each year performed the best and the one of the bottom performed the worst. And so if you look at the 65%/35% portfolio you’ll notice it’s the white one, it kinda stays in the middle the whole entire time right? It’s pretty consistently across the middle, it has higher years and it has lower years. And so a well designed portfolio in my opinion is designed to do just that. I mean I would consider this like a highway and at the very top is a guardrail and at the very bottom is a guardrail and we just want to stay in the middle and not hit the guardrails, right? So, and it’s also interesting because you never know which asset class is going to perform best and which one is going to perform worst. And that’s the purpose of this whole chart. It’s kind of confusing looking and scattered because there’s no pattern. If you look at 2011 emerging markets were the worst performing, in the very next year it turned out to be the best performing. You can see similarities like that throughout this chart. Again, the main purpose of having a diversified portfolio is to not have these big extremes that we’re seeing here in some of these places. Alright I don’t want to spend a lot of time on this chart, I know you guys get the idea. We’re basically just trying to stay in the middle. We don’t know what’s going to do the best and we don’t know what’s going to do the worst, so there’s no point in trying to guess which ones are going to do best.

I do want to show you some events that have happened throughout time now, that have scared people and made them make poor investment decisions that have affected their portfolios and potentially ruined their retirement strategy. So, here we are at the beginning, 2000 and then here we are at 2022, and again this is our $1,000,000 portfolio and we ended up at the end of December 2022 with $3,120,000. But you can see throughout that period there’s been some ups and downs and obviously there’s been some things written about them that scare people. So, I only have the economy selected here but we can select market, political, crisis, everything. And you can see all these TIME magazine articles where the world was coming to an end and then made people make poor investment decisions and just did not stick to the plan. Part of the reason I chose starting at 2000 is because it’s very similar to kind of where we are right now heading in this downturn, and so I felt it was a good time frame to illustrate for you guys especially that are just retired or considering retiring very soon that it’s not the worst case scenario. And don’t forget the purpose of the news is to scare you, buy stuff, buy their stuff, watch their stuff and you know even with everything that’s happened we still finished with $3,120,000 bucks so just never panic, never panic I guess is the key here.

Alright, so the next thing I wanna show you guys is the performance history of the S&P 500 and my 65%/35% portfolio. I wish these colors were a little bit more contrasting, but the blue represents the 65%/35% and the green represents the S&P 500. What’s interesting is you can see that when the S&P 500 is down it’s typically down a lot further than the 65%/35%, except for this one particular case here, and here, and here. But even these gaps weren’t that big when it’s up you can see that it’s up more typically than the 65%/35% and again that goes back to that skittles chart where we try to stay in the middle more than go for the extremes.

Alright so I wanted to go through those quickly,  you guys get the idea of what I’m trying to show you here. The main slide I’m trying to get to is the growth of the portfolio over that period of almost 22 years so let’s see here, I wish again these colors were a little bit more contrasting but the top line for now or here the blue one, is my portfolio the 65%/35% the bottom one is the S&P 500. So we’re at the start again, it’s 2000 and you can see for a while my portfolio was on top. Until about 2017 and then we had a crossover in 2018 where S&P 500 took off. So you can see at the end of that time period S&P 500 was at $4,700,000. My portfolio again was at $3,120,000. And you’re probably thinking, well why the heck would I ever not just wanna be in the S&P 500 then it’s such a big difference in performance? Remember we’re doing this with a distribution of 4% and again we’re having a very similar scenario in 2000-2001 is what we’re seeing right now where the markets are going down and you’re pulling income out of your portfolio. And so that’s why again I chose those dates, so people that are doing that right now might feel a little bit more relief as I get further into this. So I remember we started with a million bucks and we’re going through this whole entire thing, we’re pulling out 4% the entire time, and at the end we’re still at a million bucks. Where as the S&P 500 we’re at half a million bucks. And so I hope that adds a little bit of comfort in knowing that we’ve been through times like this before where money is coming out of portfolio‘s, and we still end up pretty much where you started off. Again, this is over a long period of time it’s 21-22 years and you know if we continued this out any further who knows what that would actually look. At some point this might cross over for all we know. But a diversified portfolio typically is going to be your best hedge against what’s going on right now versus taking a shot on you know something as simple as the S&P 500 with just 500 stocks in it. Diversification is the key to this whole entire thing. And it’s how to properly manage money in my opinion.

So, again I hope that does add a little bit of comfort there knowing that the same scenario has happened before and it’s happening again right now. Again, you’re taking income out during a down market it’s very scary you’re seeing your portfolio go down, it went down here and it came right back up and it ended pretty much where it started. Again, I hope that’s a visual that had some impact because I know a lot of you are very concerned about what’s going on right now.

So to finish this up, i’m gonna go back to the beginning here. I want to show you guys a disclaimer, I don’t know if I actually have to show this or not, I’m sure I would be told by compliance that it’s a good idea to do so. So I’m just gonna scroll through this, you guys can pause it, read it, however you wanna do it. Alright you get all that? So basically guys, hopefully you see now why I talk so much about the importance of portfolio diversification. It matters. There’s no doubt these are scary times. It honestly seems like there never is any positive news lately. Hopefully I’ve demonstrated with the TIME magazine cover, it’s not really that uncommon. There’s always something going on,  the markets have been on a good run for a long time and we have these dips every once in a while. It’s just the way it is. However the fundamentals of the US economy are strong. Unlike in 2008, banks have money to lend and the average U.S. citizen actually has money to save right now versus the way it was back then when they were borrowing. Even with higher inflation prices, people are still able to save because incomes have also gone up. I believe what we are seeing now are the markets returning to normalize prices. I don’t have a crystal ball and you know me, I certainly am not a market timer but I believe right now is a very good time to invest. As the saying goes, the time to buy is when people are fearful, the time to sell is when they are greedy. Right now people are definitely fearful. Going out on a limb here, but I think when all is said and done the markets will end up positive at the end of 2022.

As always, if you are still concerned about anything discussed in this video, please don’t hesitate to give us a call or use our online appointment schedule at the top of our website. I know it’s been a bumpy road lately, I know you see your portfolio values going down, I know you see high gas prices and high inflation. But, I also hope to see that in most cases your portfolios are not down as much as the markets are, even after fees. I also hope you see that we are actively rebalancing to try to find value and we’re also tax loss harvesting to offset some of the gains when we rebalance. Yep, some asset classes are actually growing.

Alright that’s it for this one. Hang in there everyone.