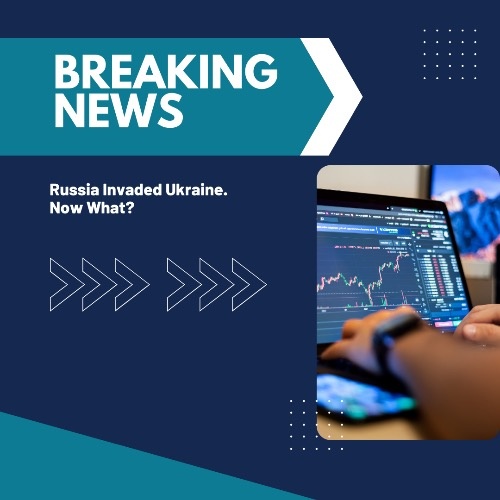 I think anyone of rational thinking knew this was inevitable. Before the invasion, Russia had amassed 190,000 troops. That’s the largest troop deployment since World War II. Most of us were hoping they would stay in eastern Ukraine where Russia has already had troops since 2014. That was wishful thinking.

I don't have a crystal ball but some things that will most likely happen are obvious. Gas prices will continue to rise but I personally believe that will be short term. Food prices will continue to rise since Ukraine is a very large corn producer. That's going to make inflation look and feel even worse. We'll see market volatility continue and hopefully that will also be short term. I would guess that the expected fed hikes will off the table for a little while. We’ll have to wait on see on that. I always say markets are efficient and I believe that a lot of the speculation of a Russian invasion has already been priced into the markets as we have seen them dropping almost on a daily basis.

Severe sanctions have been placed on Russia that don't seem to matter to Putin. At least not yet. Russia will be hurt financially in a big way. Other countries that rely on Russian oil will also be affected. I still firmly believe that global asset allocation is the proper way to create portfolios. However, the Russia situation will effect global markets. I sent an email to our clients about the steps we are taking in response to this situation. I can't list them here since this is a public blog but feel free to reach out to me if you are interested in learning more. I remain confident that the underlying US economy remains strong and will be in better position than most countries to make a quicker recovery. At the moment, the US banking system is very strong in good position to support the economy.

Of course, inflation remains another concern affecting the markets. It's a very real concern since it affects our wallets on a daily basis. Again, no crystal ball here but the consensus is that we should see supply chain issues ease in Q3 of 2022 and that will bring down inflation to normal levels again. Our Money Guide Pro financial planning software has actually made an automatic long term inflation increase to 2.6%, up from 2.3%. That's a lot better than the 7% we are seeing now. I plan on writing a separate blog post on inflation very soon.

The worst case scenario would be World War 3. While I think that's a very low probability, it's still a possibility. If that were to happen, everything I said above goes out the window. It is encouraging to see see Russian protestors saying "No to war".

For now, hang in there, remain focussed on the long term goals and let your advisor, (if not me) help you achieve them. For a history of how markets have bounced back after a crisis, Putnam Investments has provided us with an excellent easy to read 2 page document that might hopefully help put your mind at ease. I have attached it below.

Please don't hesitate to reach out to me if you have any questions or concerns.