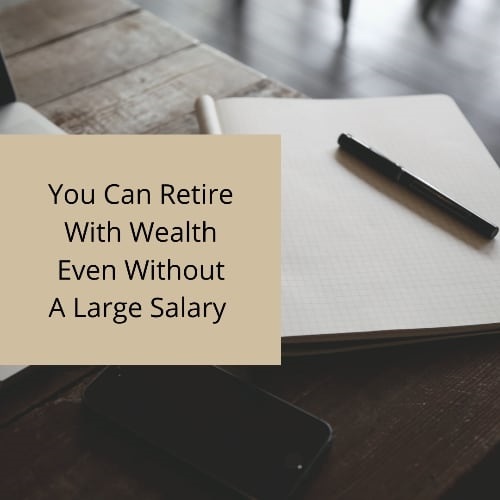 You Don’t Make a Lot of Money but Want to Start Investing. What Should You Do?

Article in Advisors Magazine: Teens Seek Financial Education but not From the Best Sources

Here is a link to another blog post we made about compounding interest.

I was recently asked to contribute to an article in Advisors Magazine about teenagers and their financial education. I’ll link the article down below if you are interested in reading it. Anyway, while I was working on that I started thinking about people in their 20’s or 30’s that might not make what’s considered to be a big salary. A lot of times, those jobs might not offer a 401k either. I would imagine if that’s you, you might be wondering, “I would like to start saving something, anything for retirement but I am not sure what to do”.

This might sound a little strange but there are actually some advantages for those that aren’t considered high income earners. It opens the door for opportunities that high income earners are phased out of. Regardless of anything I am about to say, the number one thing for you to do is have an emergency fund. Save for at least 3 months of salary and keep the cash in a bank account. Then, don’t touch it...unless there is an emergency. I realize it may be hard to save up 3 months of salary. Just start with a little each month.

Next, if you have a 401k plan at work, contribute up to the company match if you can afford to. If you don’t have a 401k plan but want to start investing, I would recommend opening a Roth IRA. You can contribute up to $6,000 per year in a Roth if you are below age 50. It’s important to note that unlike a traditional IRA, Roth IRA contributions are not tax deductible but since you are in a lower tax bracket, that won’t matter that much. Let’s talk about the advantages. First, like a traditional IRA, your investment grows tax deferred which means you won’t have to pay taxes on the growth that might occur while the money is invested. Second, you can withdraw the money that you invested at anytime. In other words, if you have invested a total $30,000 over time but the account value is now $40,000 because of growth, you can withdraw that $30,000 that you invested for any reason. However, you cannot touch the extra $10,000 of growth before age 59 1/2 without a 10% early withdrawal penalty, so don’t do that. Third, another great thing about Roth’s is that after age 59 1/2 and assuming that the Roth IRA has been opened for at least 5 years, you can withdraw not only the amount you invested but also the growth that may have happened on your investment tax free whereas traditional IRA withdrawals would be taxed at your current tax rate and might potentially push you into a higher tax bracket.

There is another 5 year rule that allows access to the growth before age 59 1/2 for things such as a first time home purchase, but to keep it simple, let’s just stick with age 59 1/2.

Lastly, Traditional IRA’s require that you take out an annual required minimum distribution starting at age 72, (currently). Roth IRA’s do not have that requirement and you can still continue to contribute to Roth IRA even after age 72.

With that said, would you rather be a high income earner and be phased out of the Roth investment option? My guess is your answer would be yes. Remember though, you have time on your side. A little can go a long way if you continue to invest over time. Let the markets and compounding interest work for you and don’t think you can’t retire without wealth. It’s completely possible.

That’s it for this one. I hope this was helpful and we’ll see you on the next one.

Source: What Is a Roth IRA?